An Evening with Fran Lebowitz 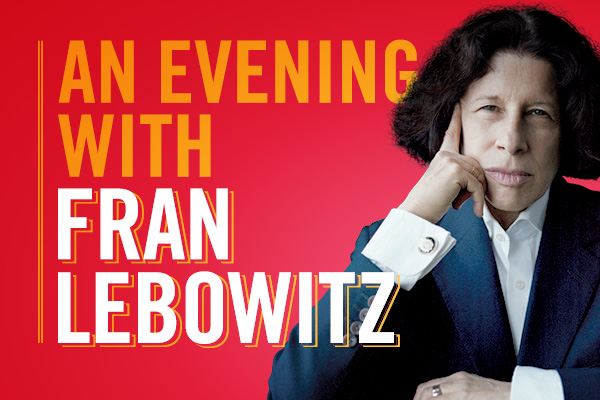 Join THEMUSEUM for a moderated talk, candid audience Q&A, and a post-event book signing you won’t want to miss!

This special presentation is in support of THEMUSEUM, with a portion of the ticket sales supporting operations of THEMUSEUM. An Evening with Fran Lebowitz will be held at Lazaridis Hall in the Lazaridis School of Business and Economics at Wilfrid Laurier University on Saturday, October 22nd, 2022 at 7:00 pm.

VIP tickets, which include a reception with Fran Lebowitz prior to the event, are available for purchase. There is only a limited number of VIP tickets available.

In a cultural landscape filled with endless pundits and talking heads, Fran Lebowitz stands out as one of our most insightful social commentators.

Her essays and interviews offer her acerbic views on current events and the media – as well as pet peeves including tourists, baggage-claim areas, after-shave lotion, adults who roller skate, children who speak French, or anyone who is unduly tan. The New York Times Book Review calls Lebowitz an “important humorist in the classic tradition.” Purveyor of urban cool, Lebowitz is a cultural satirist whom many call the heir to Dorothy Parker.

Lebowitz worked odd jobs, such as taxi driving, belt peddling, and apartment cleaning (“with a small specialty in Venetian blinds”), before being hired by Andy Warhol as a columnist for Interview. That was followed by a stint at Mademoiselle. Her first book, a collection of essays titled Metropolitan Life, was a bestseller, as was a second collection, Social Studies. By turns ironic, facetious, deadpan, sarcastic, wry, wisecracking, and waggish, Lebowitz’s prose is wickedly entertaining.

She can also be seen in various documentary films including the American Experience series on New York City, as well as Mapplethorpe: Look at the Pictures (2016), Regarding Susan Sontag (2014), and Superstar: The Life and Times of Andy Warhol (1990), among others. In 2010 Martin Scorsese directed a documentary about Lebowitz for HBO titled Public Speaking. A limited documentary series, Pretend It’s a City, also directed by Martin Scorsese, premiered on Netflix in 2021, and was nominated for the 2021 Emmys in the Outstanding Documentary Or Nonfiction Series category.