On June 24, 2019 the City of Kitchener council unanimously declared a climate emergency and we sounded the ALARM. It is time to take Action and Learn about our effects on climate. We must Adapt our lifestyles, take Responsibility and Mobilize climate action now!

THEMUSEUM used its stage to shine a light on the efforts being done to help conserve a natural climate and make transformative connections to what individuals, corporations and governments must do to chart a new course of optimism for the future.

The anchor, Agents for Change | Facing the Anthropocene, co-curated by Nina Czegledy and Jane Tingley featured ten interdisciplinary women artists working on the theme of ecological change at the intersection of science, technology, and art. ALARM also explored the impact on the melting polar ice caps, water, climate refugees and a family exhibition exploring at-risk species with a focus on the dwindling frog population as they approach the sixth mass extinction.

Agents for Change | Facing the Anthropocene

Our ice caps are melting at an alarming rate! MELTING ICE brought together photographic works from local photographers Ben Eby and Brian Riddell on their trips to the Antarctic and the Arctic circle.

Also featured in this exhibition was an interactive iceberg installation! The audience explored these amazing works while ice cracked beneath their feet.

From October 2019 until March 2020, Indigenous youth at Six Nations of the Grand River worked hard creating personally meaningful pieces to share their stories, experiences, concerns, solutions and teachings with water managers and the Canadian public. The stories ranged from personal experiences – e.g., lack of access to safe drinking water on reserve – to sharing teachings that have been passed down through generations.

The project was a co-created collaboration between Elaine Ho, PhD Candidate at University of Waterloo, and Richelle Miller, Coordinator of Music for the Spirit & Indigenous Visual Arts (with early inspiration from artist and former Six Nations Wildlife Manager Paul General). Elaine’s PhD focuses on the lower section of the Grand River, Southern Ontario’s largest watershed. The river, and many of the major cities around it, are situated in the Haldimand Tract – land given to the Six Nations community to enjoy and control in perpetuity in return for their alliance during the American Revolution. However, only about 5% of the original Tract remains in the hands of the Six Nations. Representatives of the Six Nations are rarely included in any decision-making capacity when it comes to the management of the Grand River or other local natural resources. Further, when engagement opportunities are made, most individuals of the community do not have the procedural knowledge, technologies, or funding capacity to fully participate.

Grand Expressions was designed to inform water managers in a culturally relevant way. The objectives were twofold: first, to feature young people’s voice and creative works in a publicly accessible way; and second, to capture their relationships with water (especially the Grand River or Lake Erie) to inform management. Capacity-building took place in different ways, including workshops to teach participating youth about photography and an art camp to provide them with space to create their works.

This collaboration was a unique opportunity to engage youth in traditional activities while offering water managers a rare glimpse into the values and concerns of some members of the Six Nations community. This project resulted in new community relationships, empowered Indigenous youth, and discussion among staff from the local municipality and Conservation Authority. Grand Expressions was viewed and reflected upon by 200 undergraduate ecology students over the summer of 2020. Further, the project inspired a meeting between the youth and the Canadian Minister of Diversity and Inclusion and Youth (to be scheduled once in-person meetings are possible).

Audiences peered into the world of amphibians and reptiles in the interactive exhibition which featured 8 live habitats of frogs and their friends! They discovered these amazing creatures and learned about their critical, but often overlooked, role for humans and our current climate emergency.

Animals in this exhibition included:

Care & Safety of Our Animals

Also featured in EXTINCTION was a Common Octopus! Audiences watched this spectacular creature master disguises in our very own tank. Once they were acquainted, they entered our contest to name our new tentacled friend!

Check out our Education Programs that relate to EXTINCTION!

SPECTRUM | The Climate Emergency Experience was a temporary pop-up exhibition presented by THEMUSEUM at The Shops at Waterloo Town Square. Audiences were completely immersed within each art installation in this one-of-a-kind experience that raised the ALARM on climate change. They had a chance to look at the climate crisis in a whole new way (literally!) as they were confronted with impressive installations which, like the scientific evidence of our changing climate, are impossible to ignore.

This is an offsite exhibition at The Shops at Waterloo Town Square. Questions about this experience? Call Visitor Services at 519 749 9387. 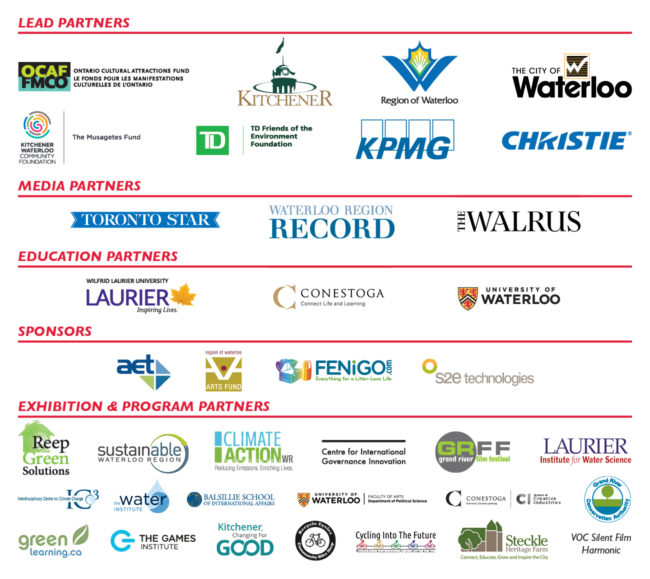 THEMUSEUM hosted a ‘Day of Action’ which explores the connections between children’s mental health and climate change.

Check out the resources

Learn more about different topics surrounding our climate emergency throughout our speaker series.

Bringing the whole family to THEMUSEUM?

Check out our family events

Want to teach your students about what they can do during our climate crisis? Check out our Education programs!