A McDonald’s ad has reaffirmed just how valuable THEMUSEUM and other cultural organizations are to the community. It has also prompted THEMUSEUM to extend an offer to the restaurant chain.

The 15-second spot features a woman playing the role of a museum guide. “There were dinosaurs and then there weren’t,” she says, “OK, then exit through the gift shop”. The franchise then suggests that $5.00 is better spent at one of their chains than at a cultural institution.

While a calorie-laden diabetes inducing kid’s meal is $5.00 (plus tax… and only at participating restaurants), THEMUSEUM confidently offers far better value for money! 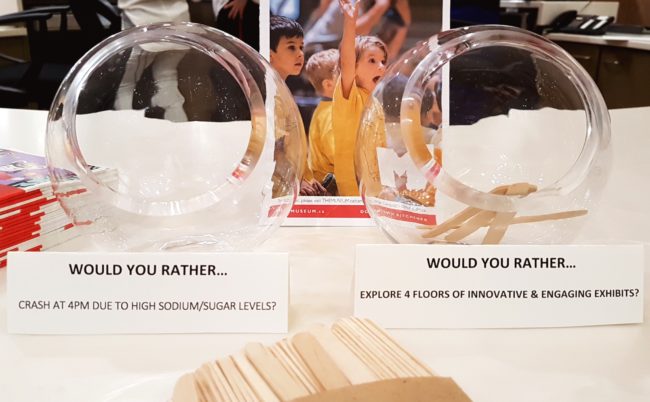 Stirred by the remarks pertaining to his now-extinct species, Maverick, our resident T-Rex, said: “On behalf of THEMUSEUM, we would like to give McDonald’s 5,000 free children’s passes in exchange for $5,000. It certainly beats the plastic toy they take home now.”

While Maverick enjoys the occasional Brontosaurus Burger, THEMUSEUM patrons are partial to B@THEMUSEUM, a local restaurant which is re-opening today at 11:00 AM following a burst pipe on Sunday.

We ask that before our supporters exit (and not through the gift shop – although there’s some really cool stuff in there) they take a moment to vote. Would they rather spend their money on a Big Mac or on a cultural experience? Or, as we see it: 500+ calories vs. learning, growth and development.